The innovative 3D printing project came through Stage 1 of the Prototype Printing at our supplier Hyperion’s facilities in Finland in early 2022 with flying colors. Work is now underway to analyze opportunities for use at projects in Mexico, Chile, and Argentina where the project can be taken to Stage 2 of On-Site Implementation. 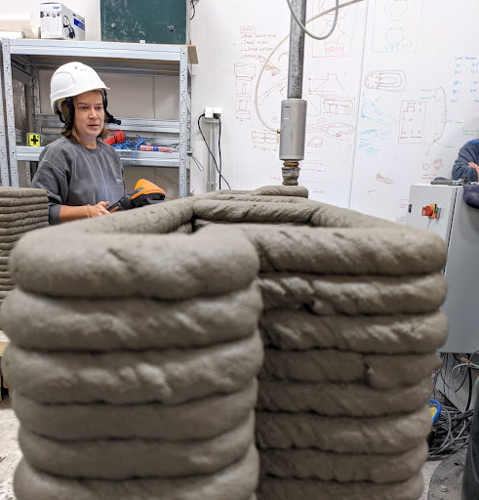 The natural process for an initiative as it develops is to transition to the implementation stage following a successful pilot phase, which for this project was achieving "3D printing in reinforced concrete." To implement this technology at Techint E&C projects, the idea is to set up onsite 3D printing workshops so that reinforced concrete components can be prefabricated on-site rather than cast elsewhere at the manufacturer’s, or purchased as precast.

The main benefit driving the development of this technology throughout the construction industry and accelerating its adoption is that it substantially reduces the carbon footprint by optimizing cement use. Other tangible benefits for projects include the range of improvements in Safety and Quality standards, increased operational productivity and the possibility of eliminating formwork and reinforced steel for components with a low structural commitment. Other results of using this onsite technology are that it reduces the need for direct labor on-site and means that work can continue independently of the adverse effects of climatic factors usually affecting civil works.

Project implementation envisages a range of different opportunities, involving the study of cases in countries such as Chile, Argentina and Mexico. The results of the analysis showed that implementation of this technique becomes competitive when it involves a minimum volume of 250 m3 of printed concrete and the printing system module can be hired, complete with operators. With operating outputs of as much as 1.5 ton/hour of printing, tasks can be completed in record time. As the benefits on-site become clearer, the future envisages purchasing these 3D printing workshops and encouraging our customers to understand and value the benefits, as currently, it is still difficult for them to abandon traditional methodologies. 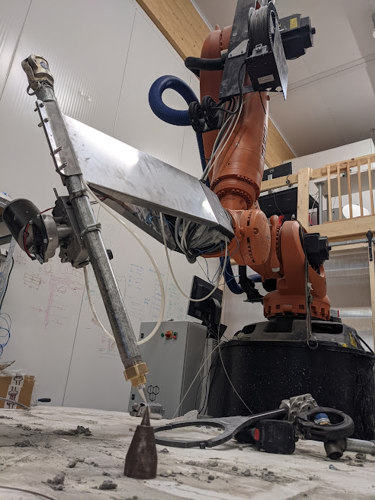 Currently, the printing system planned for use in projects features a novel 6-axis robotic arm-mounted either on a fixed pedestal or on a track system for greater versatility. The robot can also be mounted on rails or Cartesian frames for even larger prints. Working alongside the robot are dry silos and equipment for mixing, pumping and transferring fresh concrete.

The new 3D printing methodology can be used in several areas, including the most common installation components for our projects, such as drainage systems to be buried in trenches, chambers housing electrical installations and pipes, minor foundations, stairs, tanks holding liquids, and sewers, among others. All of these components can be printed without the need for structural steel reinforcement, as the fiber concrete used in 3D printing has specific tensile strength limits according to the mixture and features of the fiber (usually polypropylene). However, it’s also possible to manually add mesh and steel rods to reinforce the parts during printing or even after printing in pre-designed hollow spaces that can be manually filled with the same mortar mixture.

There are so many possibilities for using this innovative technology already up and running, and the future beckons with yet more applications. For instance, there are initiatives involving 3D printing for entire houses and neighborhoods (as in Austin, Texas, U.S.) while NASA is interested in developing the concept for autonomous constructions on Mars), all of which underscore the fact that this technology is here to stay.