On International Women in Engineering Day (INWED), Paula Betto, a Young Professional at Jaguatirica II talks about her career and the difficulties she faced when she was studying to be a Civil Engineer. 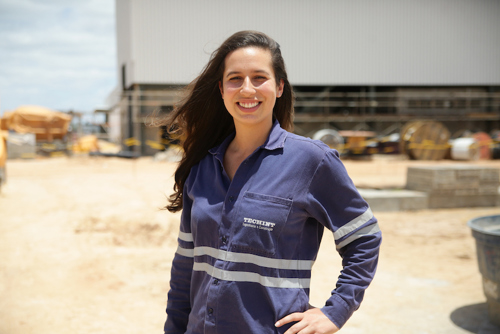 Launched as a national campaign in 2014 by the UK-based Women's Engineering Society (WES), a professional networking body for women engineers, scientists and technologists, International Women in Engineering Day is celebrated on June 23 each year (#INWED21). Defined as “a clear call to women to shape the world”, INWED is not just an international awareness campaign commemorating the work and achievements of women engineers but also aims to strengthen the space that female engineers have been gaining in the profession, which today continues to be occupied mostly by men.

In this interview, Paula Betto, a Young Professional working in the Commissioning area at the Jaguatirica II project, shares her experiences studying and working.

Paula graduated in Civil Engineering from the University of Pernambuco (Recife, Brazil) in 2017, and recalls that on campus, only 10% of the students were women, and that it was common to hear sexist jokes from the teachers, who continually undermined her ability and that of her female peers just because they were women and engineering is "a man's thing". Today, she is grateful for the solid backing of her family and a support network set up with other women students as this provided essential encouragement to continue and conclude her degree studies.

What are your current responsibilities at Jaguatirica II?

I’m working in the Commissioning area as the head of subcontracts, and I’m responsible for managing on-site technical assistance. Although my training in civil engineering and commissioning did not specifically include this discipline, I believe that one of the great skills acquired by engineering professionals is their flexible approach, arising from broad-based learning, which allows them to take part in many different areas and contribute from the breadth of their knowledge and training as integral members of all sectors.

Why did you decide to study engineering?

I always thought it was incredible to be able to be a part of these huge projects and contribute directly to the country’s development. I believe that engineering gives me that every day. To see a work that I was part of completed is an indescribable feeling, as is knowing that I’m making a positive impact on the lives of so many people. This is my motivation to continue working in this area.

Did you come up against any difficulties during your career because you are a woman?

I knew I was going to have problems that men don’t, just because I’m a woman. But I have some sterling examples of women engineers in my family who were instrumental in terms of supporting my decision to follow this career path. And I met other women at university who were going through the same difficulties as me. So sharing these problems and creating a support network with them was essential to be able to continue through to the finish.

Have you ever had to deal with a situation of discrimination for being a woman?

My campus at the University of Pernambuco was for engineering, so only 10% of us there were women. Like other women colleagues, I heard so many sexist comments throughout my studies, but most of these were not from my peers but from teachers, who continually called into doubt our ability to learn just because we are women. I often heard that I should choose an “easier career”, that for a woman to be an engineer she probably has a father who’s an engineer so she gets to inherit his construction company as if a woman couldn’t be an engineer just because she wants to. In addition to several other comments implying that all female engineers must be lesbians because engineering is "a man's thing," which is a doubly prejudiced comment. Fortunately, I’ve never been alone, I made some terrific friends in college, and these comments did not deter me from getting my degree.

How did you feel when you started working in the construction market?

In your opinion, how can the construction industry benefit from having more women overall?

I truly believe in diversity in general, whether for construction or any other sector. Different people bring different skills to contribute to the creativity of the team as a whole, strengthening the potential for innovation. Another issue, which is key to encouraging the inclusion of women in the construction industry, is to ensure they get the same conditions as men, ranging from salaries and benefits to professional growth possibilities, etc. Only then will the industry be able to renew itself and benefit from diversity. Women are capable of doing any work that men do and we must increasingly transmit this message to new generations. We have to fight to ensure that the next female engineers hear less macho comments than I did, just as I probably heard far fewer so-called "jokes" at my expense than other female engineers who came before me.