Creole music: a Peruvian heritage that is today as current as ever

The marinera, waltz, huayno and festejo are some of the traditional rhythms of local Peruvian folk music. Find out about the spirit of Peruvian folklore, as told by Valeria Posada, Business Analyst at Techint E&C, in Peru, who has danced to traditional folk melodies since she was very young.

Cultural diversity is what characterizes us at Techint E&C. The company has strong roots in the places where it operates and people of different nationalities come together from around the world to make special projects a reality. This is a series of articles about our customs, roots, cultures and beliefs so we can get to know each other and strengthen ties...

When the marinera music sounds, Valeria takes to the floor, and for the three minutes that the song lasts, she feels like she rules the world. She began taking dance classes to this beat when she was a little girl, and it quickly became a passion. She used to practice for four hours after school every day, but when she started college she had to give up some of her dance time to study her course materials.

"Dance brings you into contact with your essence. When you start dancing, you focus on the music and you forget about everything else. It makes me really happy,” says Valeria, highlighting that this particular dance form has empowered women who take the role of protagonists in an intricate series of flirtatious steps to court their men.

The marinera’s leading exponents are popular musicians such as Eva Ayllón, Chabuca Granda, Felipe Pinglo, Polo Campos, Oscar Avilés, Arturo “Zambo” Cavero, and Lucha Reyes, whose performances have taken this Peruvian Creole music into the international arena. The genre originally emerged from the fusion of melodies, influences and typical rhythms sung and played variously by the native population, Spanish colonizers and African slaves, embracing an eclectic variety of styles and dances to form the backbone of the country's  . For instance, the huayno is typical of the Sierra region, while the waltz, the marinera, the polka and the festejo, among many more, are played along the Costa region, the cholones in Rupa Rupa, and the siritacuy danced by the inhabitants of the Loreto region in the Peruvian rain forest.

The marinera dance is one of the best known in Peru’s cultural heritage, and its beat one of the rhythms most recognized as typical Peruvian folk music around the world. It’s a courtship dance where the woman takes on the role of protagonist while the man accompanies her, allowing himself to be led. "At the end of the marinera, the woman triumphs as the man falls to his knees before her, surrendering in love at her feet," explains Valeria.

There are three main rhythmic variants of this dance: the northern one (lively and cheerful), the Lima version (more leisurely and elegant) and the serrana marinera (influenced by the huayno).

"One of the most representative symbols of the marinera is the white scarf, held in the right hand and used by both the woman and the man to accompany their steps, expressing how they fall in love during the dance. The peak moment is called the triumph or flight, where both dancers join their handkerchiefs in the middle and wave them together as a symbol of celebration. After the escape comes the zapateo, or footwork with a bit of stamping, where the woman shows off her movements by swirling her skirts, and then there’s the end,” describes Valeria.

The women wear long finely-pleated skirts which flare outwards as they twirl, in addition to heavy, striking makeup, gold and silver artisanal jewelry and singular braided hairstyles. Two long braids plaited down the front for single women, back braids for married women, and braids pinned up in a crown, for widows. 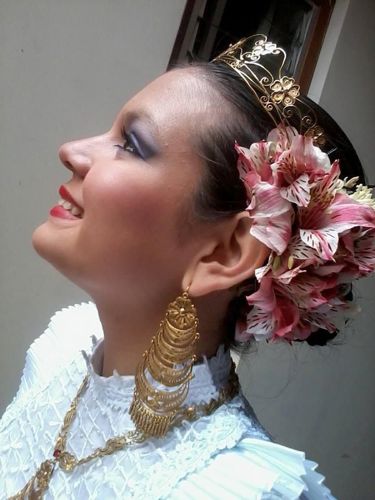 Each variant has its own costume variations. “In the northern one, the woman is barefoot and wears her skirt almost to the ankles. The man wears a hat, shoes and a suit, in some cases perhaps a linen poncho. Then, in the mochero style of the northern marinera, it’s the man who dances barefoot, representing the fishermen of the North or a peasant, with his pants rolled up to his ankles, while the woman wears a long straight skirt which is slit up the front, called an anaco,” explains Valeria.

The Lima marinera woman wears a more sober outfit, with her skirts over the ankle and heels. This is a more stately and upright ballroom dance, with gentler, more subtle steps where the zapateo or footwork is not as vigorous.

In the marinera serrana, the woman wears a long white shift under a wide-skirted silk dress, a fine woolen shawl, straw hat, mid-heeled shoes and a handkerchief, while her partner wears drill trousers, a white shirt, a sheep's wool poncho, a hat and a handkerchief. This marinera is heavily influenced by the huayno, so the rhythm is slower and marked by a melancholic, yet stylized expression.

The other Peruvian folk dance rhythms also have their peculiarities. The festejo has its roots in the Peruvian black mestizo culture, with stronger and more sensual movements, especially in the chest and hips. The main instrument is the Peruvian cajon, or box. Here, the costumes hark back to the clothes worn by the black slaves with a strong African influence. Others wear typical 19th century outfits, the men sporting pants with gaiters, tied with a handkerchief at the waist, full-sleeved shirts and vests while the women wear a headscarf, colorful dress or skirt, and long white streamers. Over time, the skirt has become shorter.

The waltz is a ballroom dance, iconic in its elegance, and the most popular sung music. The women wear very long skirts, big earrings and lots of makeup while the men wear suits. The movements are smooth, sophisticated and elegant. 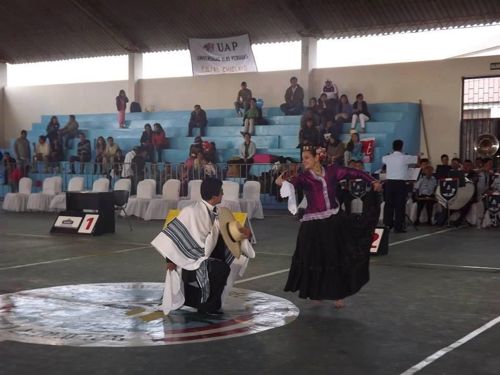 By contrast, the huayno is all joy and energy. The footwork is more relaxed and one unusual feature is that the steps are all danced bent at the knees.

During the year, there are many different folk concerts for music and dance alike, but the great event of the year is the Day of the Creole Song (celebrated on October 31) where the well-known peñas are organized to for people to share, show and enjoy all kinds of music. Music lovers meet in clubs, restaurants or bars where parties are held featuring singers and dancers, and typical dishes are served, along with plentiful local drinks such as pisco sour. After the main show, the music continues to play and everyone takes to the floor.

The festival was first held in 1944 with the aim of paying tribute to the country’s leading folk musicians, composers and performers principally to keep their local traditions alive.