This is an unprecedented project because of the execution timing and design methodology, since the work, at height, had to meet extremely stringent safety standards—and not interrupt production operations on the line below that continued running. 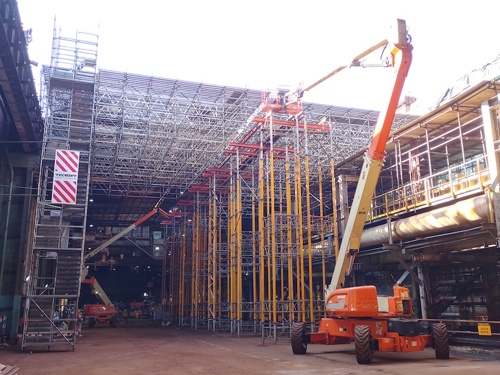 The tasks to refurbish the roof over the production lines began in March 2021, to dismantle and replace the three beams spanning the distance between the columns, each beam measuring 45 meters in length, 30 meters in width, and 55 tons in weight. Measuring 1,350 m2, the revamped roof also included fourteen new LED lights which were mountain on the new structure to improve lighting in the operating area below.

The Pickling line is the stage of the process where rust and surface impurities are removed from the hot rolled steel sheet, and it is prepared for cold rolling.

The constructability analysis for the roofing work began in 2016, and a number of meetings were held between Ternium's Engineering division and the Techint E&C Steel Projects team. Their remit was to design a rigid platform able to shore up the roof at different points for a controlled and safe disassembly process, while the production line continued operations as usual underneath.

During the bidding process, Techint E&C's Steel Projects team worked with the scaffolding equipment suppliers to come up with an innovative idea, involving linking two types of systems featured in their company catalog. One was the system of beams used to support formwork usually employed for highway bridges with large spans, and another was the system used to shift roof panels in sports stadiums.

When linked together, these systems created a work platform with shoring capabilities that could be moved along parallel tracks such as the railway lines used by the gantry cranes, which stand at the entrance and exit of the line used to handle the output from the Pickling line. Presenting this new concept propelled the company into a more competitive place during the award process.

The size and complexity of the work required solid early planning, logistics design and safety requirements, developed by Techint E&C and the companies PERI (scaffolding), Tecmaco (cranes), and coordinated by the customer Ternium. The team analyzed all kinds of equipment and their capabilities to carry out the three main roof panel lifting maneuvers together with Tecmaco, the supplier of the lifting equipment which won the company’s internal tender. The roofing beams were pre-assembled at floor level using a modularization approach to make sure they were as finished as possible, minimizing the need to work at height.

“This is the first time that a mobile structure of these characteristics has been designed, as it includes the possibility of sliding it around on skids, fulfilling the double function of a work platform and shoring structure to support the entire load of a roofing panel. Due to the methodology used to support the process and the novelty of the structure itself, this was an unprecedented job in Argentina, both for our company and for PERI,” highlighted Leandro Ezcurra, Techint E&C Site Manager. 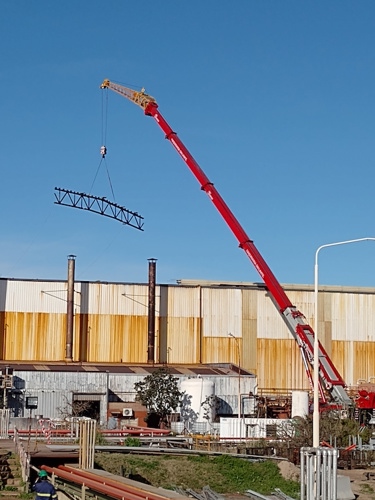 The team from Ternium also emphasized the dimensions of the work: “A project of this size required some 1,800 m3 of scaffolding for the safety platform alone and the crane used to assemble the structures had a capacity of 350 tons, while we had a total of fifty people taking part in the work at the same time,” pointed out Fernando Aranciva, a Construction engineer from Ternium's Engineering and Environment Department (DIMA).

“Another aspect to be highlighted is that the plant’s production tasks were entirely unaffected and could proceed at the same time as the work on the roof, taking all the care and measures required. The scope of the Engineering design included building a roofing structure over the line itself, beneath the mobile platform, as a rigid barrier to prevent any possible falls of material and enabling maintenance and production works to continue safely on the line,” described Adrián Medicina, Ternium's Ensenada Maintenance Manager.

“We worked very hard to train our resources, holding special meetings with all the members working on the project to analyze each sequence marking a change in risk, so we could be sure we achieved all the prevention objectives," highlighted Gerardo Alcorta, Head of QHSE at Techint E&C.

“We focused our attention on safety, thinking about all the risks as early as possible and also look at acquiring new equipment and other elements at the bidding stage to ensure the work would be developed safely at a later stage. Due to the extreme complexity of this project from a preventive point of view, we held periodic meetings with senior management at both Ternium and Techint E&C until every contingency had been planned for,” explained Marcelo Janicki, Construction Manager of Techint E&C.

Once again, the success of the task shows the outstanding degree of synergy achieved between the Group's companies, since Ternium and Techint E&C were able to work in an articulated manner at all times, ensuring all the standards they share were meticulously met. “The workplace climate generated was exceptional, we achieved great levels of synergy between all the areas involved in the project. This was essential when it came to progressing swiftly and decisively, so that we could achieve the proposed objectives in a satisfactory manner. Once again we were able to help our customer meet their objectives, be commercially competitive and achieve effective implementation in an area of the country that always tends to pose challenges for us,” emphasized Carlos Alfaro, Techint E&C Steel Project Manager.