In the run-up to Christmas 2020, work at the Parnaíba V Thermoelectric Power Plant in Santo Antônio dos Lopes, deep in the heart of Maranhão, was in full swing. The team from Techint Engineering & Construction arrived at the site on December 23, 2020, when it was still dark, at 4:00 am, to carry out a crucial task: installing the General Electric 360-ton generator, towering over them at a height of 19 meters - the equivalent of a five-story building- The monolithic structure had to be shifted sideways over a distance of 47 meters to its base. The operation to assemble the generator took around 17 hours.

After traveling 290 km from the Port of Itaqui, in São Luís, towards the interior of Maranhão, this piece of equipment will be the heart of the Parnaíba V thermoelectric plant, generating 386 MW of energy, expanding the capacity of the national electricity grid. The complex belongs to the Brazilian company Eneva, which combines natural gas exploration and production with power generation. The company is responsible for producing 46% of the installed thermal generation capacity in the northern sector of the system and 11% of the country’s installed gas generation capacity as a whole.

The generator traveled along the BR-135 route in the hours before dawn, the culmination of one of the largest logistics operations ever carried out in the country: the special flatbed truck bearing the generator was over 100 meters long, while the piece of machinery, together with the transport, weighed over 700 tons. The road passes over 10 bridges that required structural reinforcements to bear the load, for which the company in charge of transport had to develop a metal “over-bridge” structure. More than 30 companies and authorities were involved in the operation, which was validated by competent bodies at the municipal, state and federal levels. 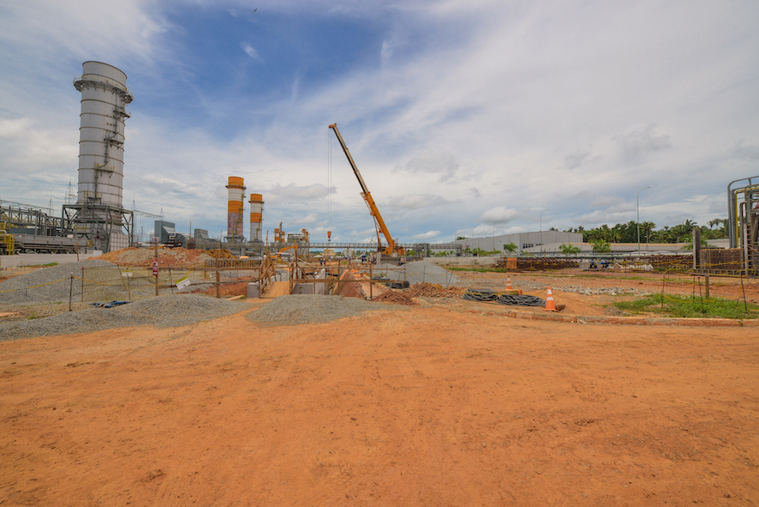 "We spent some 15 days planning every detail before starting assembly, which required building special platforms, laying rails and an electricity system, two towers and beams just to lift the generator up," said Pedro Mellucci, Construction Manager at the Parnaíba V project. The lifting operation was one of the project’s major milestones in terms of complexity, from import to transport and installation, and required a great effort from everyone.

Pedro Mellucci had already had some experience with lifting operations of this type, having worked on a project where they had to raise structures weighing up to 2,000 tons, but using a super crane, as was the case with the P-76 offshore platform. However, at Parnaíba V, instead of a crane, they had to use a strand jacks lifting system involving lifting jacks and steel wire cables.

In January, the medium and high-pressure turbines were installed on the concrete base at the site, forming the turbine-generator complex in charge of transforming the mechanical energy produced by the steam from the boiler into electrical energy for distribution by the substation at the 500 kV plant. It took over 9 hours of work to move the 155-ton turbine to its base, 17 meters above ground and 20 meters from the starting point.

Also during the same month, the third section of the chimney of boiler 31 was lifted into place, a piece weighing 29 tons, which was raised to a height of 28 meters using two cranes with a nominal capacity of 220 tons. The entire operation was carried out according to precision planning to ensure pin-point accuracy in the synchronization between the cranes and the correct balance of the piece until it reached its final position.