"Look out for the anaconda!"

The Auca oilfield lies in Orellana, the northeastern province of Ecuador, which is also home to the Yasuní nature reserve, one of the most biodiverse areas on Earth. Environmental management is thus a crucial component of the project led by CPP, a subsidiary of Techint Engineering & Construction. Learn how the company is working to protect and rescue species in a context where nature takes pride of place. 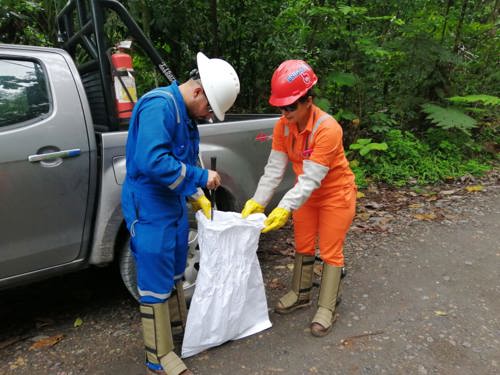 "‘There’s an anaconda on the platform, you have to go see it and rescue it!’ I zoomed in on the photo I’d been sent, and it certainly looked huge. I had to take a deep breath, put my fear to one side, and deal with the situation." When Isabel Intriago, the CPP’s environmental consultant for the project, made it to the location, the snake did not look quite as enormous as in the photo, but she nonetheless quickly deployed a plan with local personnel to rescue it. After capturing the anaconda, they carefully placed it in a white bag so it wouldn’t be able to see and thus get stressed, before taking it to a spot where it could be safely released.

The snake rescue operation is actually all in a day’s work for this environmentalist working on the company’s Quality, Health, Safety and Environment (QHSE) team, at the Auca oil field, in Ecuador.

Species rescue and relocation tasks are a priority for this project which is being developed in the heart of the Amazon rainforest. The CPP-Techint E&C worksite is located in the locality of Dayuma in the northeastern province of Orellana. This is where the company also runs its prefabrication workshops, whether for civil, mechanical or electrical engineering, and the items and materials are later transported to the platforms lying in different areas in the Auca block operated by Petroecuador.

For its work on the platforms, CPP follows a Comprehensive Flora and Fauna Management Plan. “When personnel identifies a wild animal or a plant species in the vicinity, they immediately report this to the QHSE team, so we go and take a look before launching the rescue operation. We evaluate and record the details, and then release the animal in a safe place if it hasn’t been harmed,” explains Isabel. 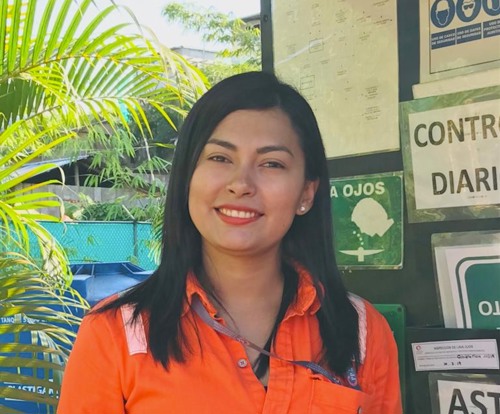 The team ensures that each find is notified, informing both the customer and the Ecuadorian Ministry of Environment and Water (MAAE) which acts as the local regulatory entity. If the animal is injured, the team of environmentalist experts arranges for it to be transported to the provincial zoo for treatment by the veterinarian and placed in quarantine while they check to see how it can be released back into the wild.

In the Auca field, all species identified are rescued as a general rule. So far forty-two species have been rescued, ranging from birds and mammals to reptiles and fish.

As the CPP is also in charge of building new platforms, it works directly with the customer, sending in specialized biologists to check the area first and rescue any species before company personnel move in.

Yasuní, A sanctuary OF biodiversity

The Yasuní National Park is a national park located in the Amazon region, which straddles the provinces of Orellana and Napo, and its main ecosystem is the humid tropical rainforest stretching out across the upper basin of the Amazon river.

It was declared a Biosphere Reserve by UNESCO in 1989 and is arguably the most biologically diverse area per square meter on the planet, also a convergence point for three different regions, the Equator, Andes Mountains and the Amazon rainforest. Detailed research carried out over the last decade shows staggering numbers of different species on an unprecedented scale, unlike any other tropical forests in the region. The national park is home to more than 2,000 species of trees and shrubs, 204 species of mammals, 610 of birds, 121 of reptiles, 150 of amphibians and more than 250 species of fish. The park is blessed with broad rivers that frequently overflow with torrential rains.

The region’s exceptional value in terms of biodiversity is matched by its vital role in generating myriad ecosystems and supporting functions such as the provision of water and hydrological regulation, in addition to offering vast economic potential related to plant species for sustainable use. Finally, there is the overarching contribution made by the Amazon rainforest to stabilizing the climate at a global level by absorbing carbon dioxide from the atmosphere.

The area is inhabited by a number of indigenous peoples including two uncontacted tribes belonging to the Waorani first nation, the Tagaeri and Taromenane who are living in voluntary isolation. To protect them and their territory, in 1999, the Ecuadorian state geographically defined and declared this to be an Intangible, or Untouchable, Zone for the Tagaeri-Taromenane (Zona Intangible Tagaeri Taromenane - ZITT).

ODDITIES ABOUT THE FAUNA LIVING NEAR THE AUCA FIELD

The electric eel, which is native to the swamps and lakes, has several examples of which have been found on oil platforms.

The most dangerous animal

The lancehead pit viper is extremely poisonous. “Once, we found one in the workshop. It became very defensive, retreated into a coil and reared up its head to ready itself for a strike. Four people were involved in capturing it to rescue it: three to carry out the rescue maneuvers and one to open the container where we were going to place it,” explains Isabel.

The two-toed sloth. The team often finds specimens that have ventured near the workshops or the platforms and have had to be rescued and relocated.