The platform is currently operating in the Buzios field and is producing high amounts of natural gas, contributing to the company’s good performance in Q2 2021. 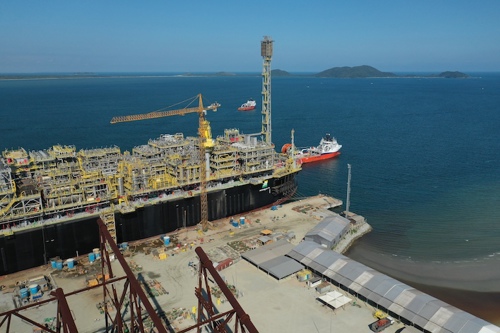 In its most recent presentation to investors, held on August 5, Petrobras singled out the performance of the P-76 platform, a project designed and built by Techint Engineering & Construction from 2014 to 2018 at the Techint Offshore Unit in Pontal do Paraná. Held via webcast, the meeting centered on reporting Petrobras’ results for the second quarter of 2021.

Fernando Borges, Director of Exploration and Production of Petrobras, pointed out that the improved performance turned in by the P-76 in the Buzios field had been a major contributing factor to the increase in the oil company's output figures for the quarter. The Floating Production Storage and Offloading (FPSO) vessel has a daily production capacity of 150 thousand barrels of oil and 7 million cubic meters of natural gas.

P-76 initiated gas flow in June 2021, enabling the company to enhance its use of the potential offered by the fields, deploy better field management flexibility and achieve greater value generation.

"Receiving this accolade from our customer is a major incentive for us to continue delivering high-quality projects," said Ricardo Ourique, Director General of Techint E&C in Brazil.

The FPSO, which embarked upon its maiden voyage, the Sail Away, in December 2018 (link to video), began operating in February 2019 with the first extraction of oil, reaching its peak of production in September 2019. Techint has trained over 1,500 professionals in this project, who are now specializing in the Oil & Gas market. P-76 also offered 319 people from Pontal do Paraná the opportunity to sign their first-ever work contract. At the peak of work, more than 5,000 people were employed at the site, with 70% of these being local hires. Since 2014, over 9,400 direct jobs have been created in a region with a population of 26,000 inhabitants.