Techint Energy Transition is exploring different resources to power the energy system of the future. In this episode, Santiago Gilligan, development manager at Tecpetrol's lithium project, gives us greater insight into this resource: where it comes from, what it’s used for and what role it plays in the energy transition. 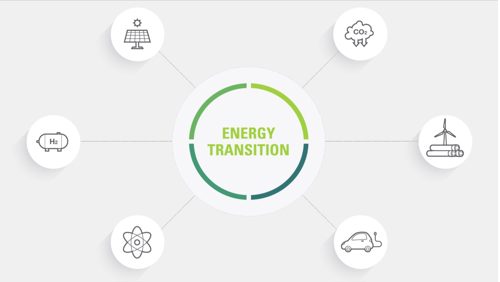 Santiago Gilligan has been working at Tecpetrol for over twenty years, always in Oil and Gas. Over the last three years, he has been devoting his skills and experience to evaluating lithium projects, in the context of the resources available in Argentina. "Lithium is a material with a very high projection of demand for the next few years, and Argentina has plentiful resources, making executing these projects a promising challenge for us," he says.

We’ve borrowed from Santiago’s extensive knowledge to compile a glossary of keywords and help you learn more about lithium, a major contributor to the energy transition and the decarbonization of the economy.

Lithium is the lightest metal found on the periodic table of elements. It’s not an energy source but a material with special characteristics which make it ideal for use in batteries to store energy, as well as various other industrial and pharmaceutical applications. Lithium is not itself an energy source, meaning that it’s not a hydrocarbon to be extracted from the subsoil or something like coal or other forms of fuel. Lithium batteries—unlike nickel, cadmium, or even the typical lead batteries used in cars or for remote controls—achieve a much higher energy density, the reason why they are beginning to be used in cell phones or cars. Lithium offers stable thermal properties, as when it receives heat, its temperature does not rise and any deformation is minimal. It also has high electrochemical potential, which is the operating principle for batteries.

Where is lithium found?

Lithium is extremely abundant in many different places across the planet, from deep in the sea, to brine deposits, rocks, and clay.

The main producer of lithium from traditional mining—which is rock mining— is Australia. In Latin America, lithium is found in salt brines, ancient lakes that have dried up, such as the Salar de Uyuni in Bolivia (which is not in production), and the Chilean Atacama desert, which has for many decades been the primary source of this material in the world. In Argentina, there are some twenty-five large, medium, and small-sized salt flats that could make the country a leader in the sector, and several projects underway in different stages of development, such as in the northern provinces of Jujuy, Salta, and Catamarca.

The lithium industry is still very small. Outside of China, there are only four salt flats being mined in the world: two in Argentina, one in Chile, and a small one in the United States. As this is a new industry, there have not yet been many technological developments, and there is little experience to draw on, so the focus is on developing and building.

What use can be made of lithium?

All materials requiring good thermal performance use lithium, such as ceramics, glass, porcelain, and car tires. It is also suitable for pharmaceutical applications and in the aerospace industry for rocket or aircraft fuselage. The greatest demand for the application of lithium since the 1990s has been for batteries in electronic devices such as camcorders, smartphones, tablets, and computers. More recently, it has started to be applied in electric cars and motorcycles, among others.

In fact, the highest projected demand for lithium is in the electrification of transport, as vehicles running on fossil fuels such as oil or natural gas are being replaced with electric vehicles which use lithium batteries. In order to reduce emissions, we must focus on generating electrical energy through renewable sources.

What are Tecpetrol's projects related to lithium?

Tecpetrol is working on two projects in the world of lithium: one is the acquisition of resources, where the company is in negotiations, either for an association, or acquisition and development. It is also working on developing new technologies to extract lithium from brines by using alternative methods instead of traditional evaporation. Currently, the company is researching techniques to enable the direct extraction of lithium from brine for industrial use, and investigating ways to make this a more controlled process.