Playing sport to ward off homesickness

Read the story of Freinnel Fuentes, who joined other Venezuelans working at the Jaguatirica II project to practice baseball.

It’s been at least five years since Boa Vista, the capital of the northern state of Roraima, became the meeting point for a kaleidoscope of different nationalities converging on the city. Brazilians, Haitians and Venezuelans interact with total spontaneity, defining the city as one big meeting point. In fact, the inhabitants of Boa Vista could very easily perform their own version of the classic Canção do Exílio (Song of Exile), by Gonçalves Dias when it says that: “Our sky has more flags; our streets, more people.”

This cultural melting pot, a lively mix of refugees, migrants, immigrants and natives, is now home to 35-year old Freinnel Fuentes. Born in Maturín, in northeastern Venezuela, he found his career ambitions increasingly curtailed by the limits of the country’s daily reality, so he took the decision to emigrate.

The shift from pipe dream to firm decision seems a simple one, as if it were merely a question of moving house or neighborhood. But, in fact, it’s much more complex. Freinnel didn’t just change countries, he changed his entire world and circle of friends. His relationship and daily contact with his people and his culture were pushed to one side when he decided to embark upon an experience of total immersion in a completely new environment, with different languages, customs, and people.

"I really wanted to grow surrounded by my things, my family and friends, but Venezuela was in such a difficult situation I could no longer find a way of developing there," recalls Freinnel, who used to work as an industrial security technician. Feeling as if he had no choice but to go, Freinnel left his city in September 2019 and took a bus to Brazil, a long 36-hour journey of over 1,000 km. Looking back, he remarks that in fact, Brazil was not his first choice. Freinnel originally thought about going to Colombia, a neighboring country with the same language, which would have made it much easier to integrate, but this didn’t work out.

After crossing the border, Freinnel spent almost four months with no prospect of formal employment, until he began work at Techint E&C in January 2020, more specifically as a refrigeration mechanic at the Jaguatirica II Thermoelectric Plant. At the company, he met all kinds of people, many with their own cultural baggage like him, but nonetheless, he found himself hankering after that elusive something that would connect him to his country of origin. It was then that he recalled Venezuela’s most popular sport.

To fully appreciate the importance of baseball in Freinnel's life, we must wind the clock back a few years, and revisit his childhood. Just like soccer in Brazil, baseball for Venezuelans is the sport that runs in their blood, and in Freinnel’s life, it was a major influence at a very tender age. He remembers starting to play when he was just four or five years old with his family, sparking a passionate interest that encouraged him to play more and more until a family tragedy abruptly stopped everything

When he was 12 years old, his younger brother died. In his grief, Freinnel turned his back on the diamond (the informal name for infield, where all the bases and most of the action in the game of baseball takes place) and stayed away for several years. He would only find the strength and motivation to overcome the pain of his loss when he arrived in Brazil, to begin his university studies in Industrial Safety. It was only then that he felt able to don a glove, helmet, and baseball bat once more.

Almost instantaneously, Freinnel felt the joy of the sport coursing through his veins again, and vowed to get back on the field as quickly as possible. He set up his own baseball team called “Techint” at the construction site to compete in a local championship in Boa Vista and, of course, as a way of rekindling that sense of home. As Júlio César García, QHSE Manager at Jaguatirica II points out, "one of our values is about ensuring the right conditions to allow everyone to work in a multicultural environment. When you see your people creating a sports team baptized with the Techint name by the employees themselves, you know you’re getting things right."

However, the joy was short-lived. Soon, the team had to stop practicing due to the pandemic. The games, which had been held every weekend, were put on hold for months until they were gradually resumed, but only on Sundays and applying all the requisite COVID-19 safety protocols. In 2021, as the new wave of coronavirus cases swept over the country, baseball practice and games had to be suspended yet again. 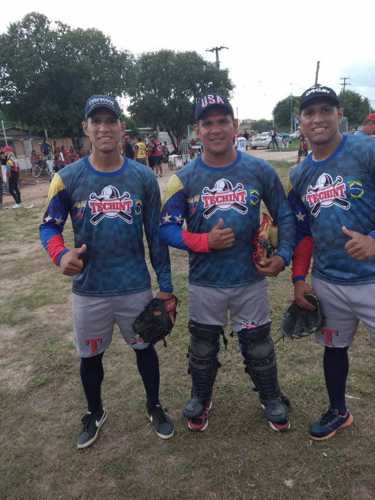 The project where Freinnel works is also the location where Techint E&C held its first action to receive Venezuelan refugees and immigrants, coordinated in partnership with the United Nations High Commissioner for Refugees (UNHCR) as well as with local and federal government bodies. The company actively seeks to simplify processes and hire foreigners, helping to facilitate the procedure of getting papers and supporting the integration of these newcomers both in the company and in society in general.

Techint E&C's coordinated actions have welcomed many Venezuelan refugees and immigrants to work in various sectors of the company over time, always ensuring that preference is given to their previous experience and training received in Venezuela. “This initiative was launched by the local HR team. What they do, after people are hired, is to sit down together with the QHSE team to map each individual’s experience so that they can work in those areas where they've already been trained,” emphasizes Priscila Leão, Social Responsibility Analyst.

Even though baseball practice has been suspended due to the coronavirus, Freinnel is eager to get back on the field as soon as possible. He has plans to play in the championships in Boa Vista, encourage more people to play and form more teams, with a view to boosting the Jaguatirica II team. The locals, on the other hand, generally more used to seeing a ball on the ground rather than up in the air, tend to watch the games with curiosity and interest. It must be said that if it’s up to Freinnel, they will probably find themselves joining in a sport not usually found in the Brazilian rainforest sooner rather than later!