Following the work that required more than 1,100 employees at its peak, Techint E&C has completed the project, earning recognition and praise for the quality of its management. 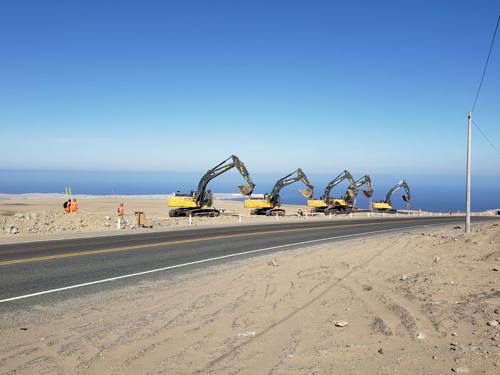 In October 2018, Techint Engineering & Construction signed a contract with the company Marcobre S.A.C. to participate in developing the Mina Justa open-pit copper mine in the department of Ica in Peru.

The main part of the project involved laying a 40.4 km long seawater pipeline: 29 km of 18” pipe, 10 km of 16” pipe, 11 special crossings, and 1.4 km of 20” pipe. The works also included an electric transmission line, a pumping station, various surface facilities, including offices and administrative buildings, as well as three 5,400 m3 tanks for Sulfuric Acid and port facilities, among others.

The main challenge was building and laying the pipeline just 10 meters from the central interoceanic highway, permanently busy with heavy traffic. Techint E&C implemented various control measures to carry out the works to protect the environment: night shifts and cutting off various sections of the road to perform controlled blasting, in the midst of extreme weather events such as the Paracas dust storms typical of the Ica region, which reduce visibility to a minimum. Planning involved displaying signs indicating the maximum speeds allowed near the work as well as during the cut-off times when blasting was taking place.

Although the project officially ended in January 2020, work continued with a skeleton crew to finish off the commissioning and assistance works until completion in June 2020.

At an online event held on June 8, 2021, Enrique Rodriguez, General Manager of Marcobre, singled out Techint E&C for the quality of its performance and commitment to safety as features of its culture, typifying the professional way in which the contract was executed and finalized. In addition, he thanked the company’s employees and managers for their dedication and commitment.

Also at the meeting were Daniel Bolados, Director of Contracts, Procurement, Logistics, and Port Operations; and Diego Ceretto, Director of the Mina Justa project. They congratulated the company for their work and expressed their satisfaction and gratitude for all the activities carried out.

Scarpari and Perillo spoke on behalf of the company to thank Marcobre for the recognition and drew attention to the high standard of work and close cooperation carried out by both teams to achieve their common objectives. Mario de Oro highlighted the efforts made by all areas to accomplish the goals and deliver a project of excellence, overcoming the challenges arising in the different phases.