When progress and self-improvement are a life choice

Néstor Santiago Martínez Landeta is the Electrical Supervisor at the Auca Field Project in Ecuador, where Techint E&C is carrying out surface works at Block 61 in the Auca production field (Orellana, Ecuador). On this occasion, he shares some of his experiences, achievements and the lessons learned during his eight years with the company.

Néstor has a degree in Electromechanical Engineering from the Technical University of Cotopaxi, and joined the company in 2013 to carry out work inspection tasks at the Shushufindi project in Block 57 (Ecuador). Since then, he has worked in different roles as assistant, inspector and operations analyst, until he was appointed to his current post in July 2019. His secret: being able to show every day that progress and self-improvement are life choices. 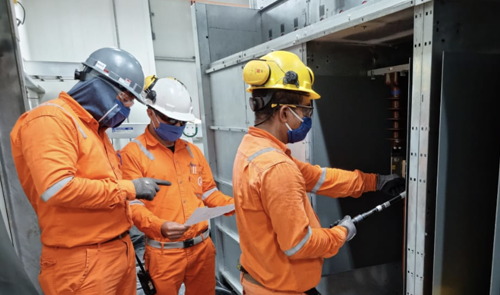 Néstor is quick to highlight everything he has learned in the course of the years spent working with the company, especially in the Operations area. He values what he’s learned from the more experienced people he came into contact with, things that have allowed him to improve how he works and grow accordingly: "I’ve met people who’ve been really helpful, very generous with their time and knowledge, because sometimes you don't know where to look for what you need. Some of the time, I knew what I was looking for but not where to find it, for example, information about a set of plans, or documentary records. This is why the guidance proffered by my colleagues was so important, for which I will always be very grateful."

When theory dovetails with practice

Néstor emphasizes that what he enjoys most about his daily job is that he can combine theory with practice: "I work on the construction site and in the office, and that's ‘all good stuff’. I can pop into the office to see what tasks there are and then go on site to check how things are being done, and intervene as often as necessary to improve a process or task.”

The challenges are certainly very interesting: "Here we provide engineering, supply and construction services for projects of varying complexity to support Ecuador's oil production, so the tasks are very varied and challenging. For example, we might be installing medium voltage structures to power surface equipment, or assembling instruments in triphase separators, or setting up well monitoring systems using wi-fi communications.”

Experiences that leave their mark

There are always defining moments in one’s career that mark a person's life forever, whether personally or professionally, and Néstor recalls one unfortunate event that happened to him. “In December 2016, there was a complete carry-over in the systems at a plant in Block 57 at Shushufindi. We’d taken a break at the end of the year, and when we returned on January 2 we were met with the bad news of this problem, as the gas lines had jammed with crude oil. Everything was covered in oil, the floor, all the pipes. Fortunately, nobody was affected as a result, but this experience served to make me more aware of the importance of always taking the necessary precautions to guarantee people’s safety and protect the environment. It’s essential to be able to learn from what happens to us."

When the health emergency was declared in Ecuador in March 2020, most activities were put on hold. In this context, public transport ground to a halt and construction crews had to stay on site for prolonged periods of time: "At that time, our work team was 214-strong, and 21 of us foreigners were obliged to stay on site. I live some 8 hours away from my job in the province of Cotopaxi, in Cantón Saquisilí, so transport became a crucial issue. I ended up staying at the construction site for 98 days, while other colleagues had to stay for over 100 days—they were just getting ready to leave when a foreman tested positive in a quick test and had to isolate himself with his team. However, luckily he soon tested negative with the PCR. Transport was gradually resumed, the company made a system of vans available, and we were able to start traveling again (…) It was hard, especially because we missed our families and were worried about them. My wife is at home with our 5-year-old daughter, so it was very difficult for me. But we always managed to stay in touch with each other, staying abreast of the daily lives of our loved ones,” recalls Néstor.

The key change made in the way work was organized during the pandemic was to set up “cells” able to function in the most isolated and autonomous way possible. Personnel bedrooms became single (before, they were double) and interpersonal contact between the different areas was limited, with a system being adopted whereby one person was the link, usually the supervisor. “Obviously this was very hard for us at the beginning, because we were no longer able to have contact with our colleagues, those moments for chatting and sharing jokes, for example, during lunchbreaks… but over time, we gradually got used to it. We did forge very strong bonds of friendship and camaraderie in our team, knowing that we shared the same objective: looking after the health of the team as a whole, and doing our job in line with the necessary standards.”

In addition, the working system in operation at the construction site whereby people work 22 days on and take 8 days off limits the need for frequent transfers and minimizes replacement movements, which is where there is the greatest likelihood of contagion.

The biggest lesson from the pandemic: knowing that you can

In Néstor’s work team, they only had two positive cases of COVID-19, and these were able to recover satisfactorily and are doing well: “Our main lesson was that yes we could, yes we can and yes we will! Although in Orellana, the case rate is one of the lowest in Ecuador, we know that we need to continue to take care of ourselves and not lower our guard.”

Learning in order to progress, making efforts to grow

Néstor´s professional career has been a steady upwards curve of growth, as shown by the succession of roles of increasing responsibility: “Everything I’ve done has always been with the intention of moving ahead as a professional and as a person. Every day I try to learn a little more to better myself. It’s very gratifying to see that my efforts have brought me recognition because it means that I’m on the right track."

The greatest of rewards

At the end of the day, there is no better reward than feeling at peace: “This is how you feel when you have the certainty that you did your best to ensure the safety of your team and do quality work. So it's worth the effort!"