For the first Techint E&C woman scaffolder, the sky’s the limit

Carolina Contreras went from being a supermarket cashier to becoming the company's first woman scaffolder. A mother of three, she’s thirty years old and nothing can stop her: "I want to manage a crew of women." 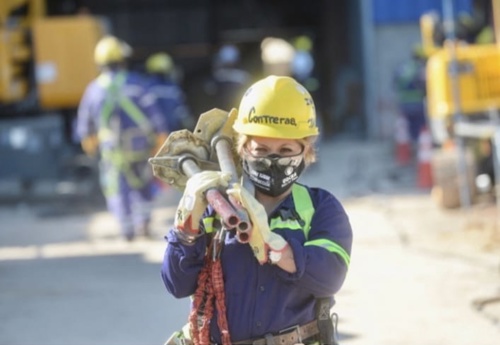 At the project which Techint Engineering & Construction is building at the Barragan Power Plant, in the province of Buenos Aires, women are forging ahead. Working as assemblers, welders, and painters, they show us that there are no jobs in the industry that they can’t do.

Carolina Contreras is one of eighty women working on the project. She began her career in the company as a shoveller, the person responsible for guiding the movement of the machines carrying material—until a foreman gave her the opportunity to move to the Scaffolding area.

She recognizes that it’s not easy working in a male-dominated field, but she feels supported by her work colleagues and considers that one sets one’s own limits.

How did you get started in the trade?

One day, Foreman Juan Sandoval asked me to help him build a burrito, which is a scaffolding structure without a platform used to delimit an area to keep personnel from walking through it. After that, the group of Scaffolding foremen spoke to the supervisor about giving me a chance to join the team. I started working on a crew as an assistant: the condition was that I had to spend some days in the office studying and other days in the field.

How did that work out for you?

It was an excellent mix as I could learn about materials, tools, and measurements at the same time as learning the trade.

What’s it like to work in the Scaffolding area?

We’re organized into crews, each one with a leader who gets the assignment and plans the tasks, an officer, a sub-official, and an assistant. Right now, I‘m a sub-official. We tend to start very early in the morning, putting on the harnesses, and attaching the three main tools we use the Lahyer hammer, combination wrench, and pliers, before donning PPE items such as helmets, gloves, facemask, and eye protection. Once we‘re ready, we go out to the field to start work. Our crew has a specific sector, which is a pump house.

The kinds of scaffolding we usually build can be:

What was the onboarding process like with the team?

My colleagues had never worked with a woman before. They're great to work with and they helped me a lot at the outset. Sometimes, at break time, we talk about this with members from other crews: generally, they're all in favor of women being on-site because they think we are smarter than them, and pay more attention to detail or have another point of view and experience.

How do you feel at work?

Fine, very comfortable. I'm not afraid of heights, in fact, the highest I've ever climbed was 30 meters at the pump house! Today, for example, they sent me to another sector because they were short-staffed, and I had to make a cantilever. They wanted me to work from the ground and pass them the material, but I didn't want to do this, so I went up and worked on the assembly at 17 meters off the ground.

What’s your take on the path you’ve trodden, and where are you aiming for?

Over these last few years, I’ve met people who’ve helped me a lot, including new colleagues heading up the workers' union, because they’ve given me the opportunity to grow. The same goes for Techint E&C, where they gave me the space and the tools to learn. The entire Scaffolding team is encouraging and supporting me! I am just starting out in this profession, but my idea is to manage a crew of women.

You decided to move out of your comfort zone: what message would you give other women?

To get on board, because I did this, I did it for myself and for my children. In life you have to progress and move on, you have to grow and you have to fight for what you want to do. We women can do it. Just as when you build scaffolding, you set the limits that you want to reach.