Between engineering and surfing the wave

Giving the lie to dated stereotypes about surfers, Roberto Klaus pursued a dual career in sports and engineering, the area where he currently works as a designer. 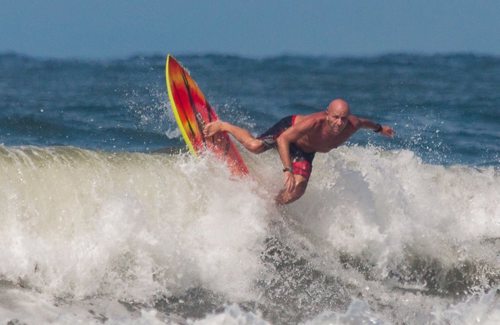 When we think of engineering, the image that often comes to mind is one of the closed offices, formal environments, and suits. Roberto Klaus Kolbe, 61, doesn’t fit into any of these stereotypes. Klaus, as he prefers to be called, is a designer at the Techint E&C headquarters in Sao Paulo, Brazil, and divides his time between the city and Bertioga beach, where he has been surfing since he was twelve years old.

Klaus is one of the Techint collaborators, the “Techineros”, whose stories have already been told, such as the one of the skater Guilherme "Gnomo".

Klaus began his love affair with surfing back in 1972 when he was a child living in Bertioga, on the coast of Sao Paulo. He remembers watching two surfers effortlessly "carving" a wave. It left him speechless with awe: "It was love at the first wave, so to speak!" he jokes. Over time, he became friends with the young surfers and went on to practice with them for many years. When he had to go to Sao Paulo, and found himself missing the waves, Klaus would hop on another kind of board: a skateboard.

Between the waves and the office

Klaus has been working at Techint for eleven years, after working in another company in the materials area. His first challenge at Techint was to develop an engineering materials catalog using an antiquated in-house system called Helios. He helped to build a new catalog for Brazil, as up until then, the system only existed in Buenos Argentina.

Later, Klaus worked on various different projects such as the Usiminas expansion works in Cubatao as well as the P-76 project in Pontal do Parana, where he ran the IN513 regulatory inspection for the entire platform. He also organized spools and coordinated the development and installation of rescue procedures and materials to respond to emergency situations. Today, he’s working on the development of a new corporate materials catalog to be adopted throughout company offices, replacing the Helios system.

“One thing I like to say about Techint is that if you’re interested in tackling new challenges, this is the place to do it. That's why I've been with the company for so long,” explains Klaus.

For many years, Klaus used to surf on remote, out-of-the-way beaches and had little contact with the competitions being held in the country. However, over time, his friends encouraged him to sign up for surfing competitions, as his skill and flair were increasingly evident.

He competed professionally between 1982 and 1988, and at one point was sponsored by various board and surfwear brands. Klaus placed 26th in the Brazilian Surf Circuit, in Uba tuba, and later competed in the state championships in Sao Paulo, Parana, Santa Catarina, and Rio de Janeiro, reaching ninth place in the 1986 Paulist Circuit.

Despite his excellent performance, he says he could never participate in competitions outside of Brazil due to the lack of incentive at the time: “I couldn't give up a safe job for something that, at the time, offered no security,” he explains. 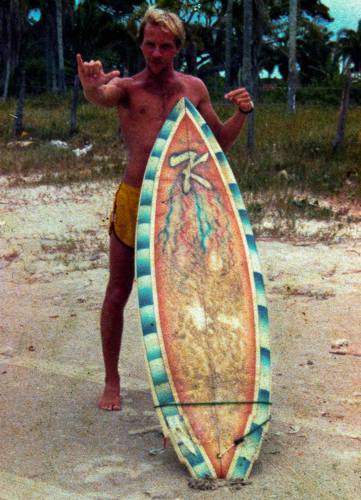 For a long time, surfers tended to be grouped together in a particular stereotype, but Klaus is swift to point out that this is all in the past: “Surfers are incredibly high-performance athletes, with an intense training routine. Now, we have three world champions, one of whom is already a two-times champion, and now an Olympic gold medalist,” he says.

“I have surfing friends from all kinds of professions: lawyers, engineers, doctors, and even judges. Surfing honed me, teaching me about tough challenges and how to overcome them. I’m delighted to see surfing and skateboarding accepted as Olympic disciplines and recognized as sports around the world, as I know it’s been a difficult journey. There are so many stories to tell and these few lines can’t do them justice, but I am who I am today, thanks to surf,” concludes Klaus.