TEPAM makes the colors pop in the local community

The Techint E&C Machinery Park has been working closely with the municipality of Arujá, in the state of São Paulo, to brighten up the neighborhood, involving children from local schools who’ve planted hanging gardens and decorating walls around the city with urban art. 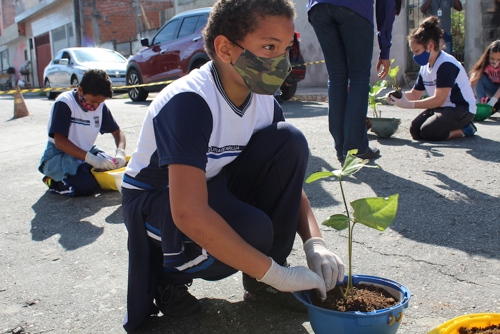 In December, the streets of Arujá, a city in Greater São Paulo, southeastern Brazil, took on an extra sparkle as hanging gardens were created and walls decorated with urban art. The actions were designed to brighten up the neighborhood, which is home to the Techint E&C Machinery Park (TEPAM) and were the brainchild of an alliance between the company and the city's municipality, with the participation of pupils from two local schools.

The children of the municipal school Cecília Caraça planted hydrangeas, pink arrowhead and purple-striped tradescantia in brightly-colored safety helmets used as pots provided by TEPAM, which they gave to employees to hang on walls, creating hanging gardens in seven cul-de-sacs throughout the city.

Uracy de Oliveira, who has lived in the area for forty years, is delighted to see Techint E&C's alliance with the community in Arujá: “This offers children a great incentive to broaden their cultural knowledge by teaching them to respect nature, which is so important for their future. And it will help us create a better world.” 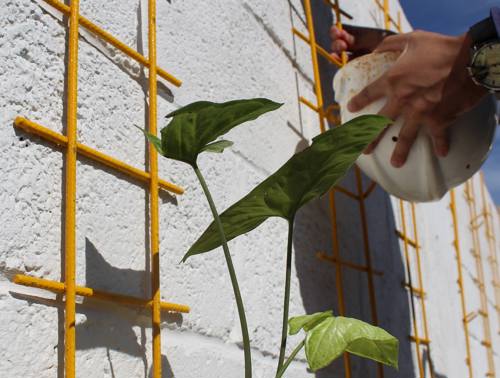 The art project took place on December 2nd and featured two guest urban artists who painted murals, including one at the TEPAM facilities, at an event attended by the mayor of the municipality. The original designs were the winning entries in an art contest based on the history of Arujá, organized by the local schools Cecilia Caraça and Recanto Primavera with the aim of fostering a greater sense of identity among the local community. There were twenty winning entries submitted by the schoolchildren, with prizes supplied by Techint E&C that included innovative pencils with seeds, notebooks, Covid-19 health kits, a winner’s certificate and, of course, their drawings reproduced on the walls of their neighborhood for all the world to see.

Túlio López, who runs TEPAM in Brazil, explains that after they repaired the perimeter wall around their facilities, Techint E&C spotted the opportunity to forge even closer ties with the local community: “After we carried out the renovations, we realized that we could do other types of social and environmental actions to brighten up the neighborhood. It’s really important for us to have good relationships with the community, and in particular to be able to provide schools with special support.”

Michele Araújo, head of Techint’s Social Area in Brazil, explains how “folks from the local community can see the history of Arujá when they walk around Techint facilities, and enjoy the hanging gardens in the cul-de-sacs, made by their kids as the result of their practical classes on the environment. It’s been a totally local action, which has underscored the company's social focus on education.”